Image of Federico Bonino. Complete processing of a galaxy. Main notes: RangeSelection to analyse gradients on the image and use of different masks to increase contrast by saturation and non linear tranformations with GammaStretch. Date: December 2014.

Applying STF can be detected an slight gradient in the image. A better way to analyze gradient is using RangeSelection tool and carefully set the values of Lower or Upper limit to visualize it.

The following video shows that the image has vignetting due to the Master Flat do not work properly and sky gradient, which seems to be more important that the vignetting, that why I chose subtraction as Correction method. 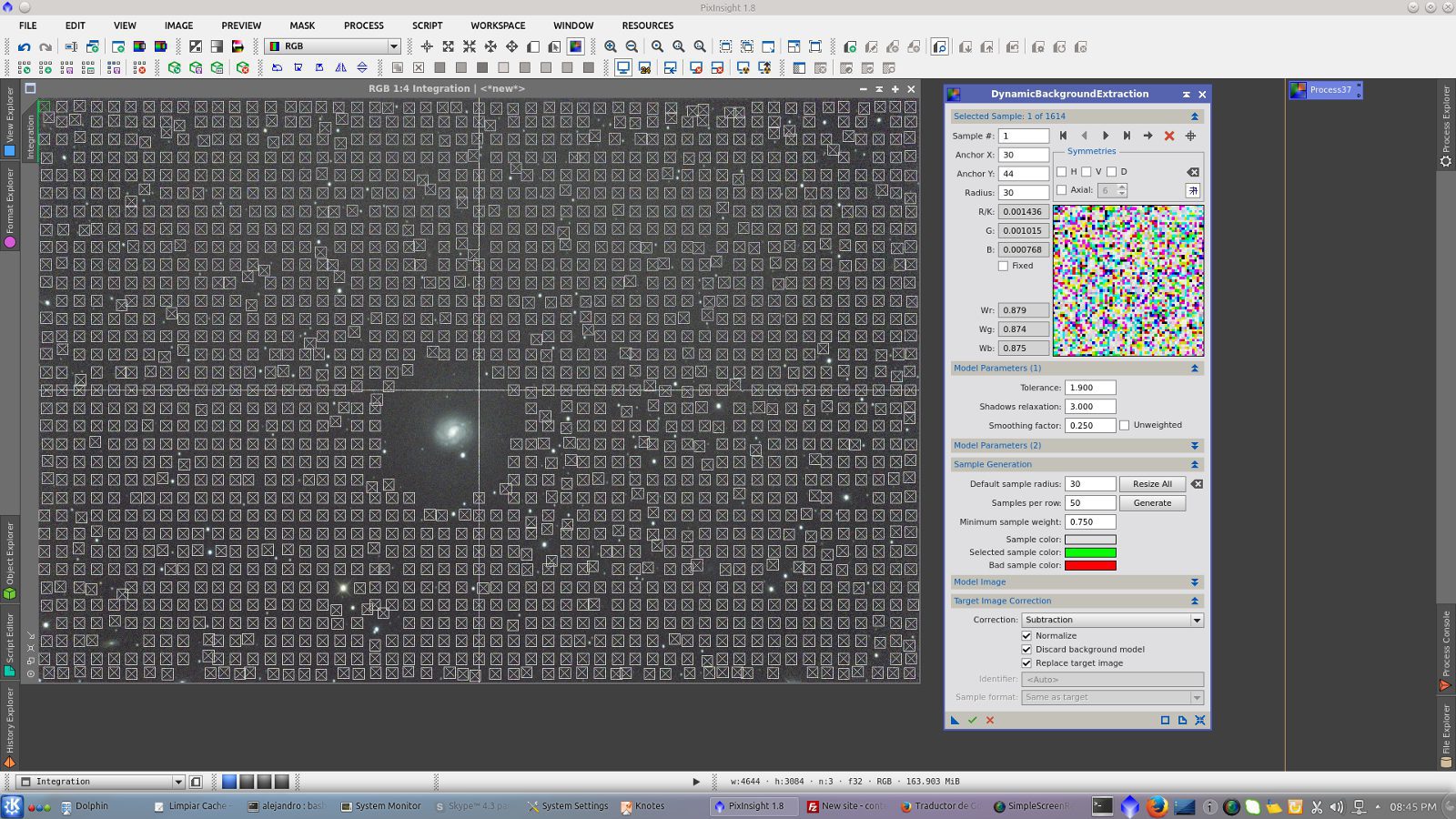 Using the script AberrationInspector generate a 2x2 mosaic without separation in between and use it as Reference image for BackgroundNeutralization Tool. 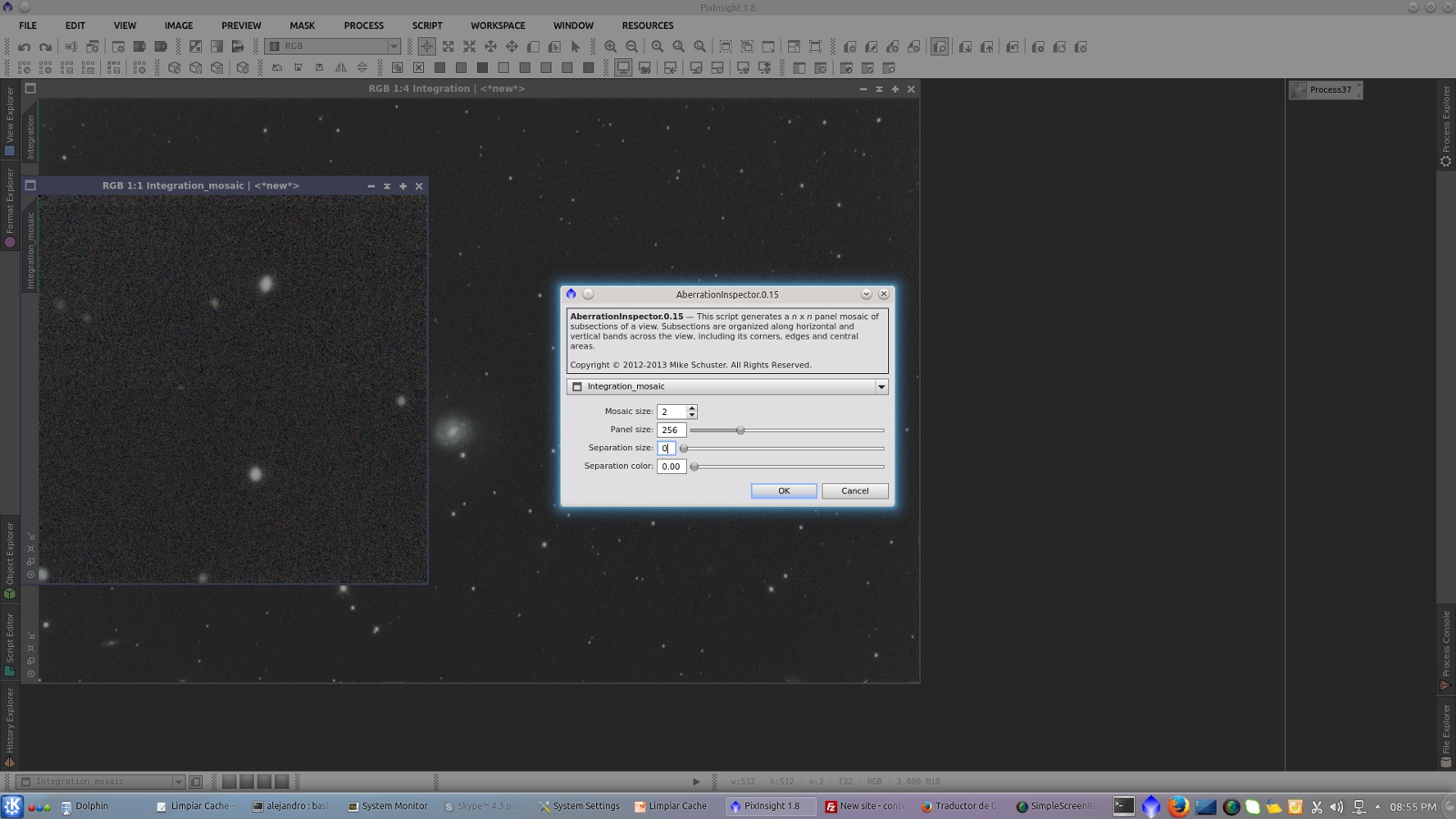 Inspect the background of the image to set the upper limit (pixels above this value will be rejected for calculation of mean background levels) Move the cursor over the Integration_mosaic image to see the values of the background. See this video to set Readout Data RGB/K 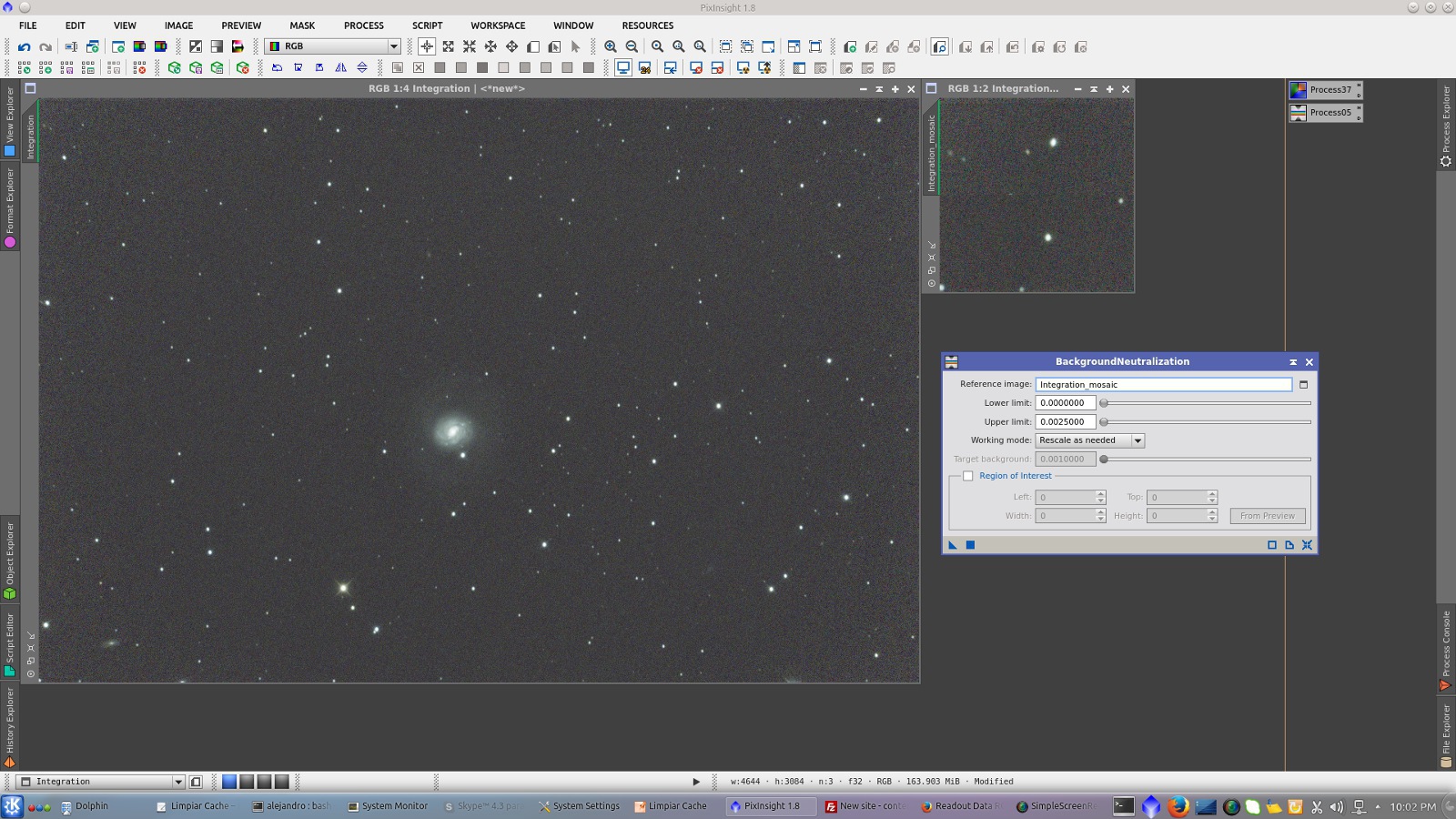 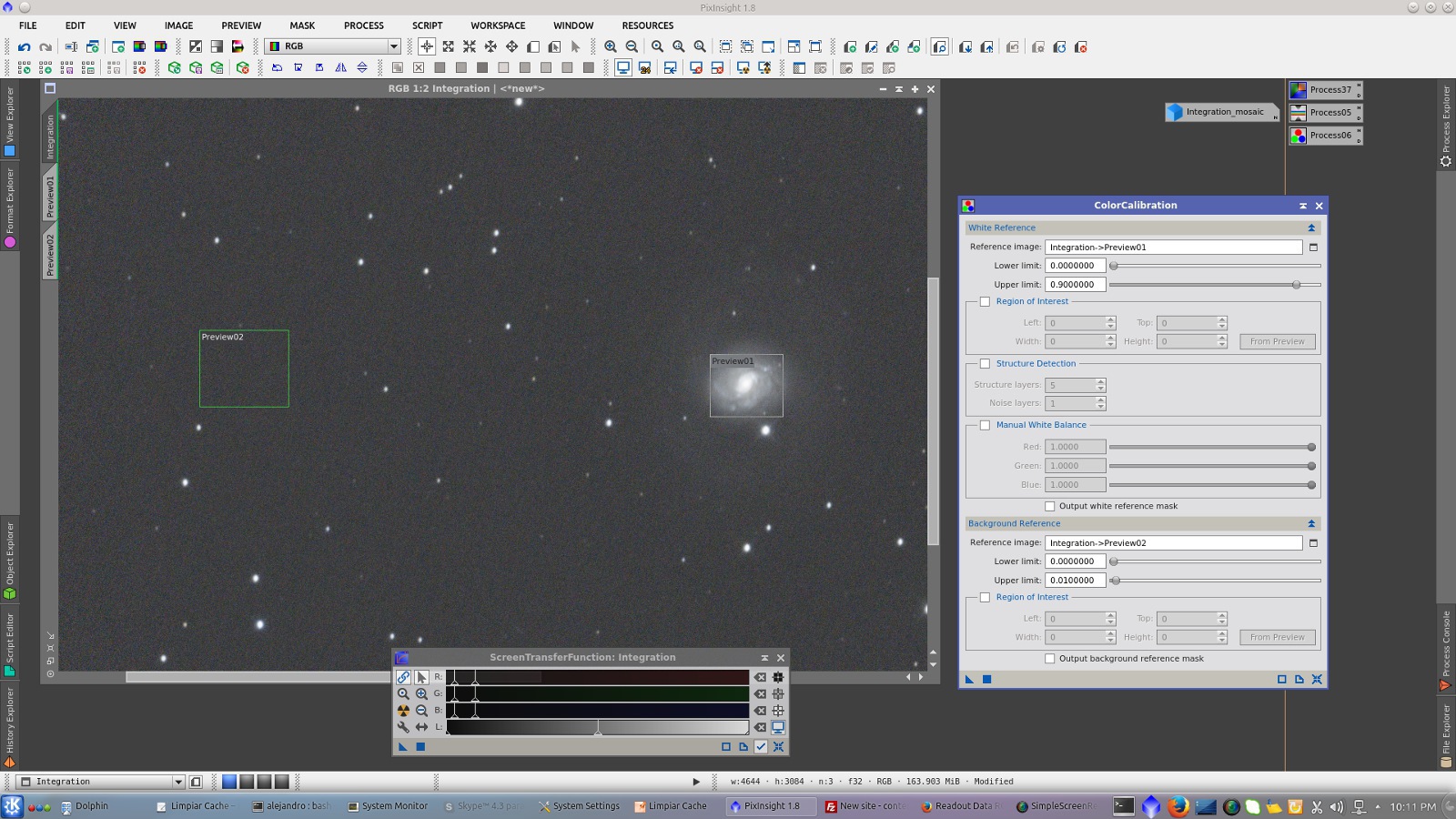 To prevent the stars cores to be afected during Deconvolution, generate a star mask using StarMask tool. It is enought for having a good protection to increase the Scale to include biggest stars and decrease Truncation to 0,5 to increase protection in the core of the stars. 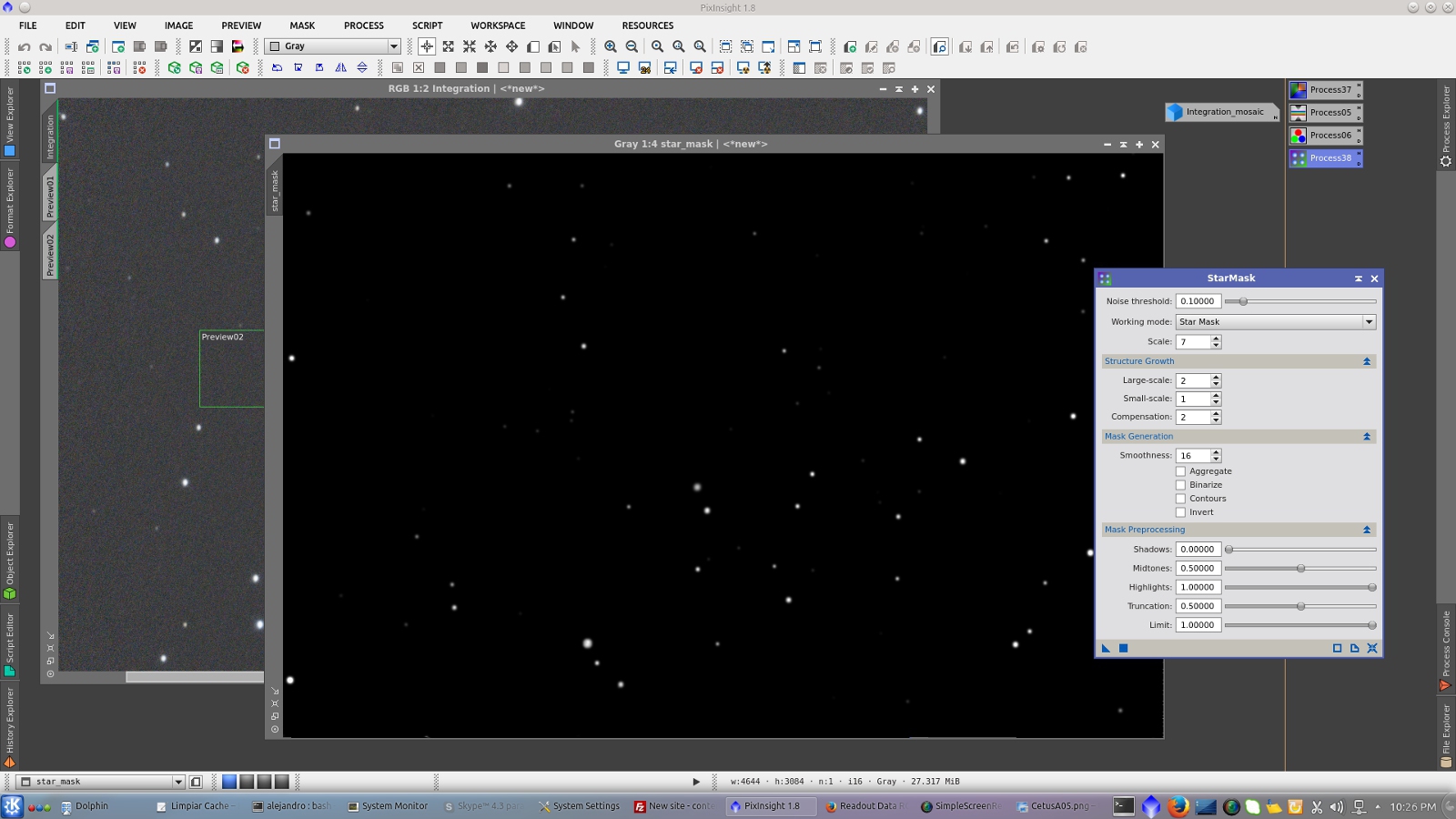 The stars are ovals due to acquisition problem that and I won't try to correct them. Apply Deconvolution to improve details in the galaxy. This time I used Parametric PSF protecting the background with Wavelet Regularization.

Some of the biggest stars have saturated cores that can be repaired using the script Repaired HSV Separation as is described in this process example. Note that I have checked Unrepaired V and the script will generate also this channel. 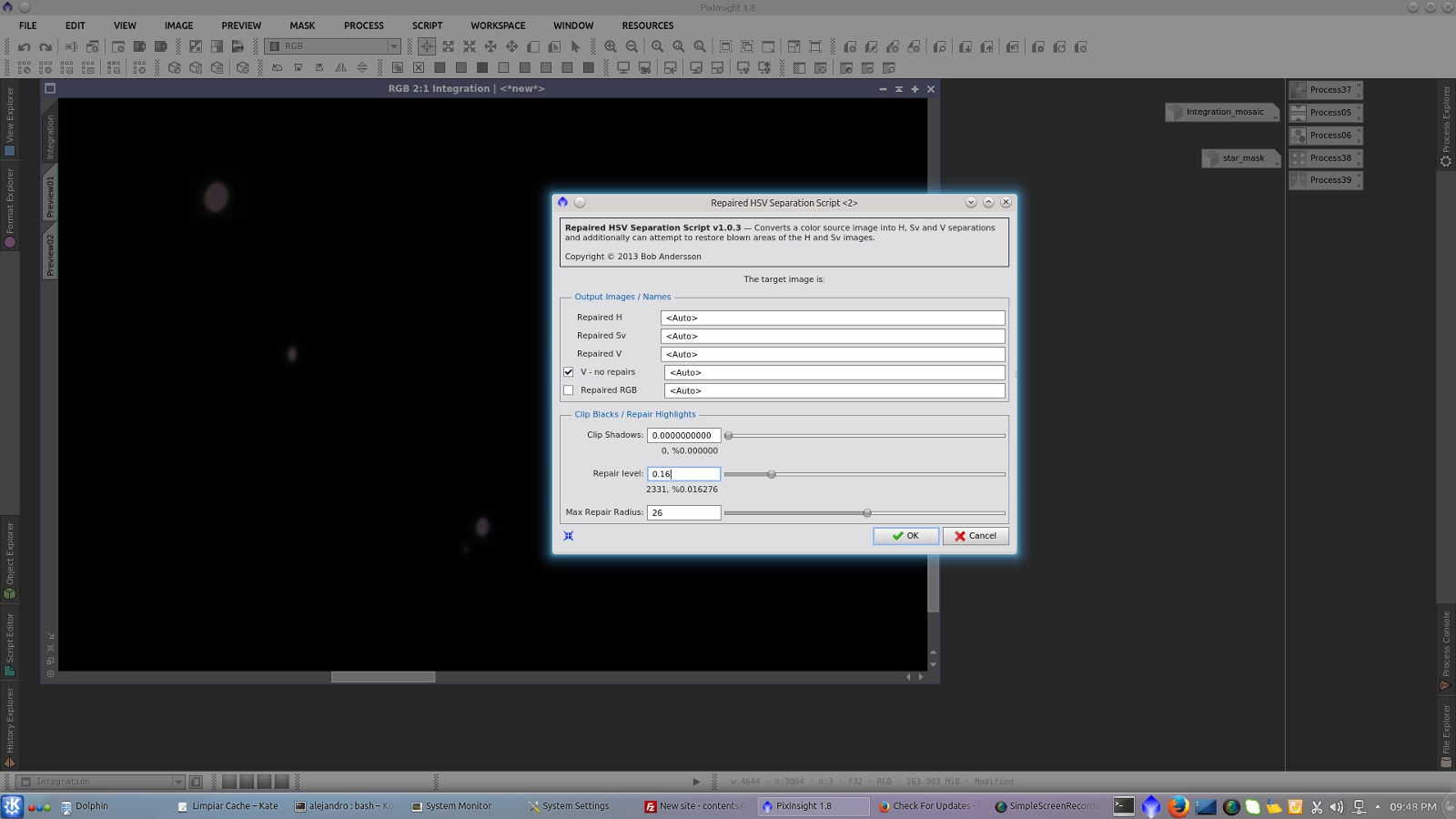 Use ChannelCombination tool to generate the new image using H, Sv and Unrepaired_V channels. Note that the stars recover its color. 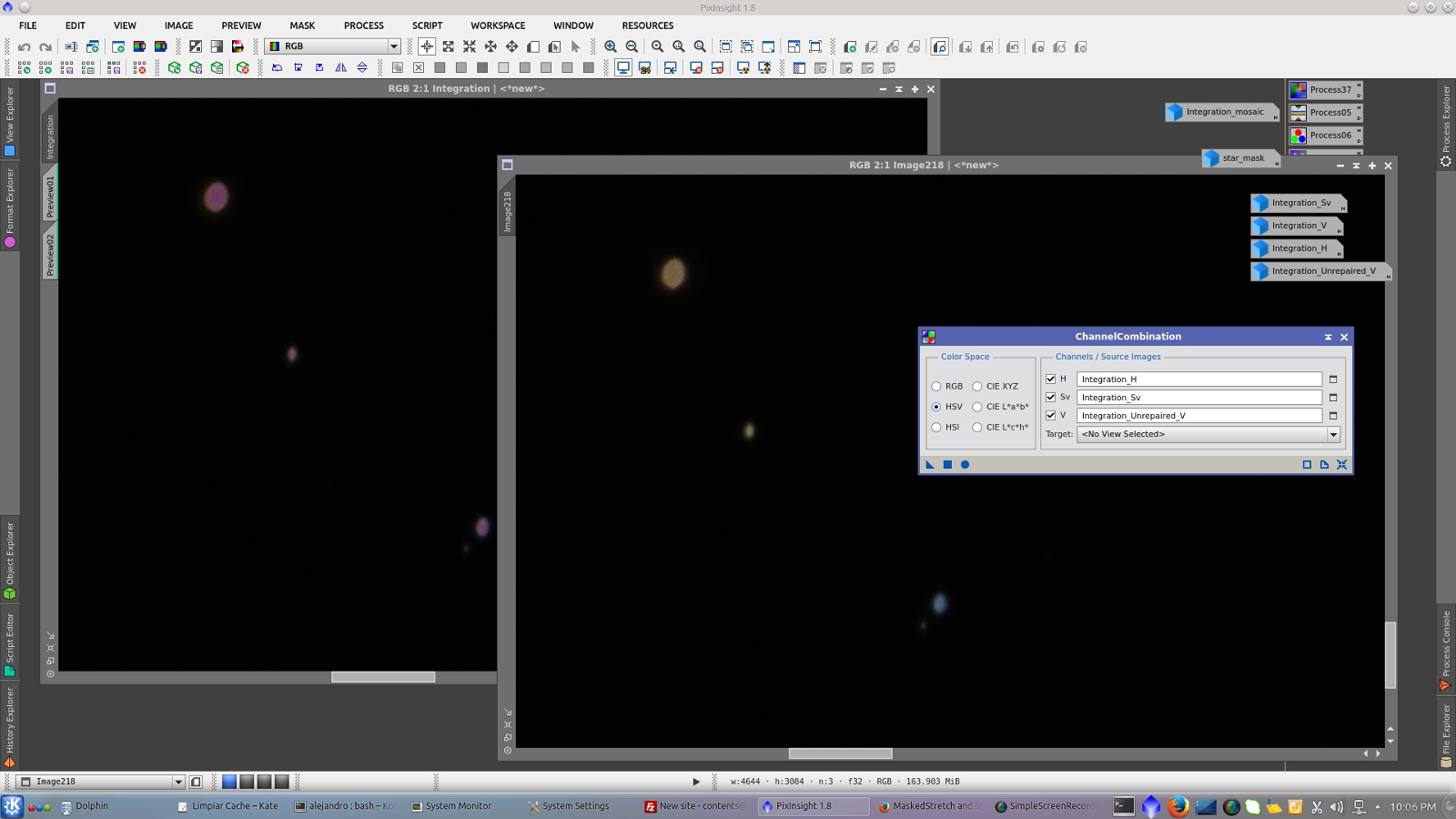 Here ends the linear stage and to stretch the image select a preview of the background to be used in MaskedStretch tool as background reference and increase the target background to a higher level. 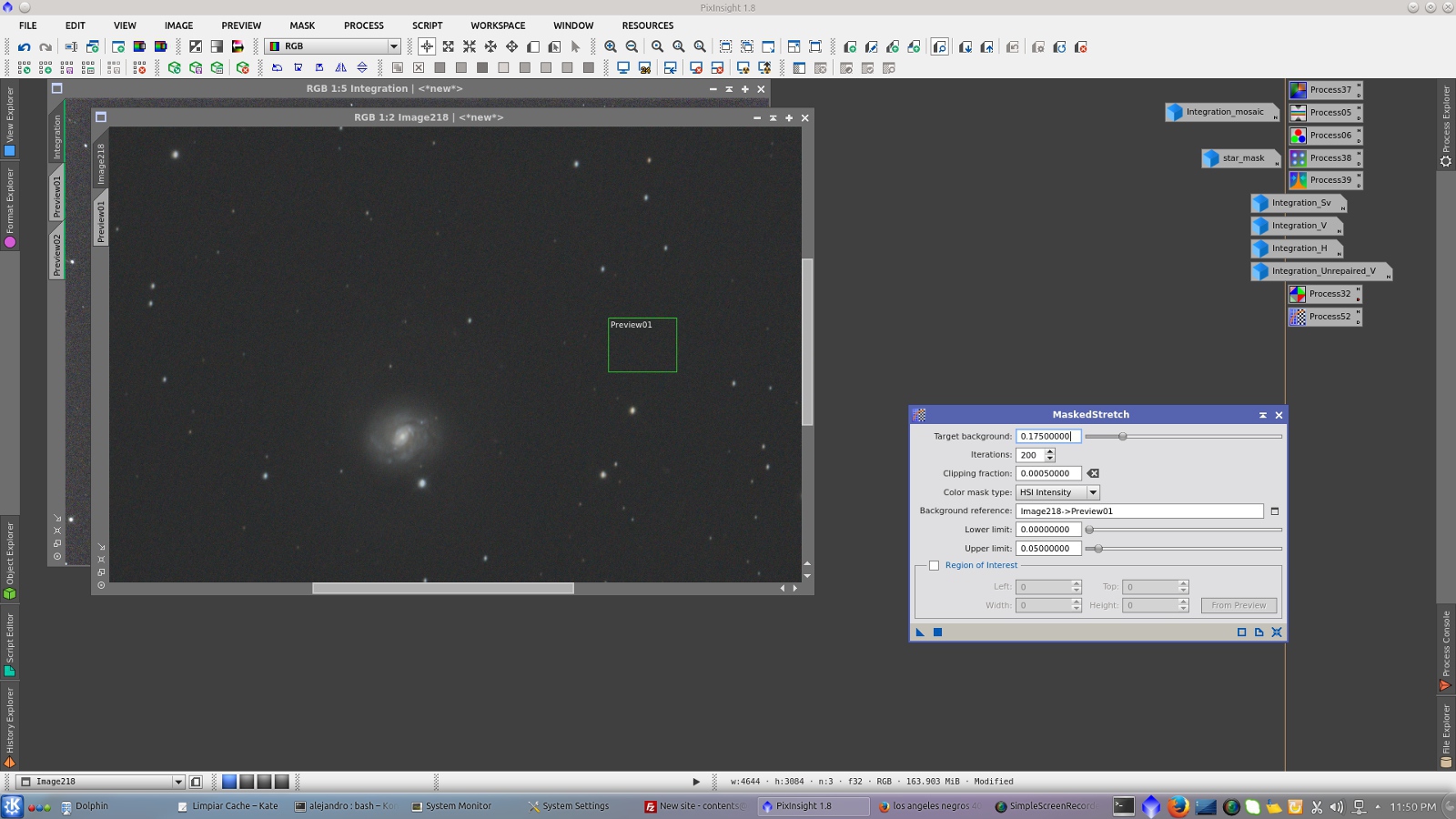 In the non linear image I apply HDRMultiscaleTransformation for increasing details in the galaxy. To prevent the cores of the stars to be afected by this tranformation I use the previous starmask to protect them. 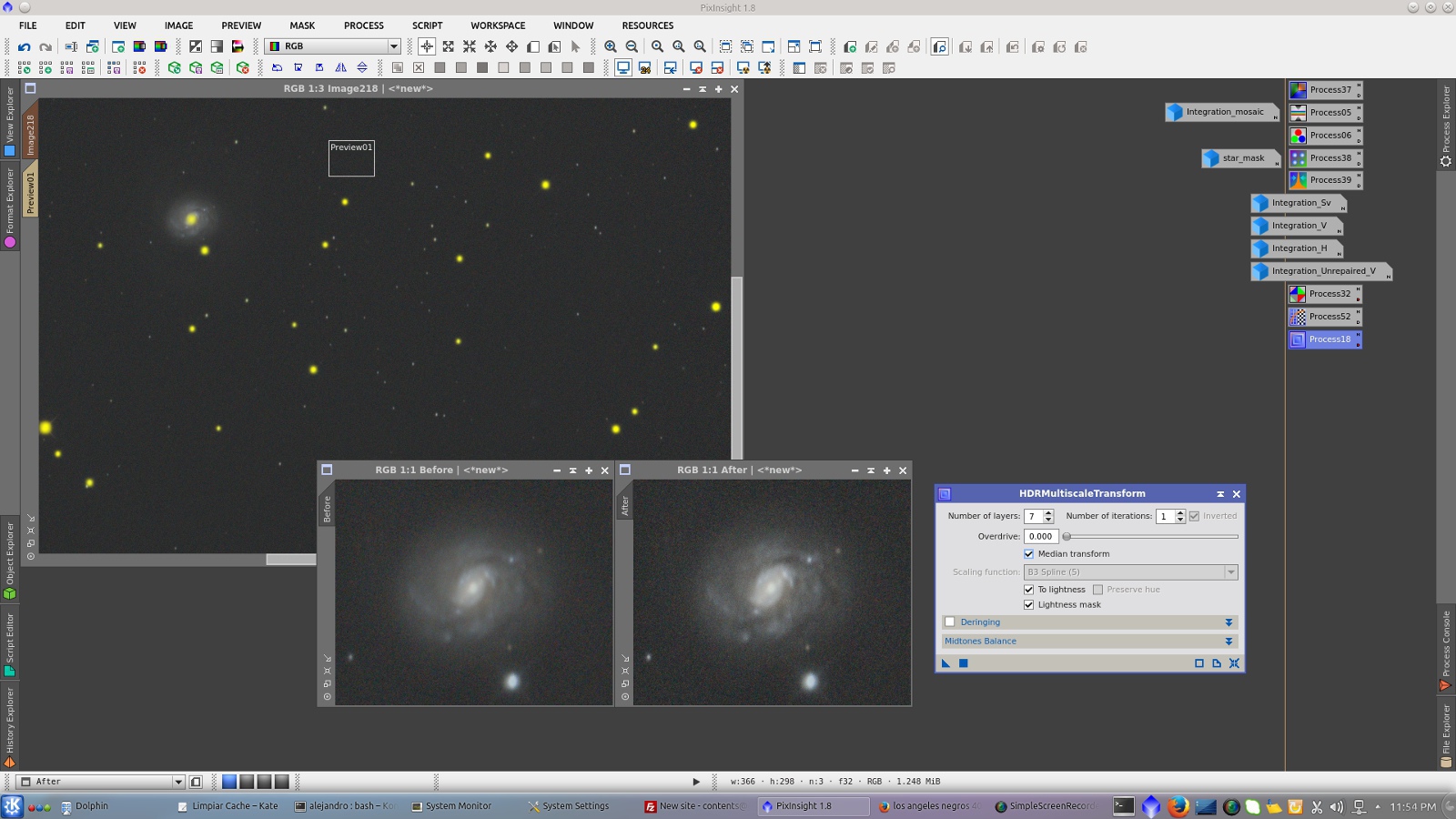 Now I will generate a Luminance mask to be used to protect the background during saturation. For that, extract L and invert it. Apply TGVDenoise to aggressively smooth the mask 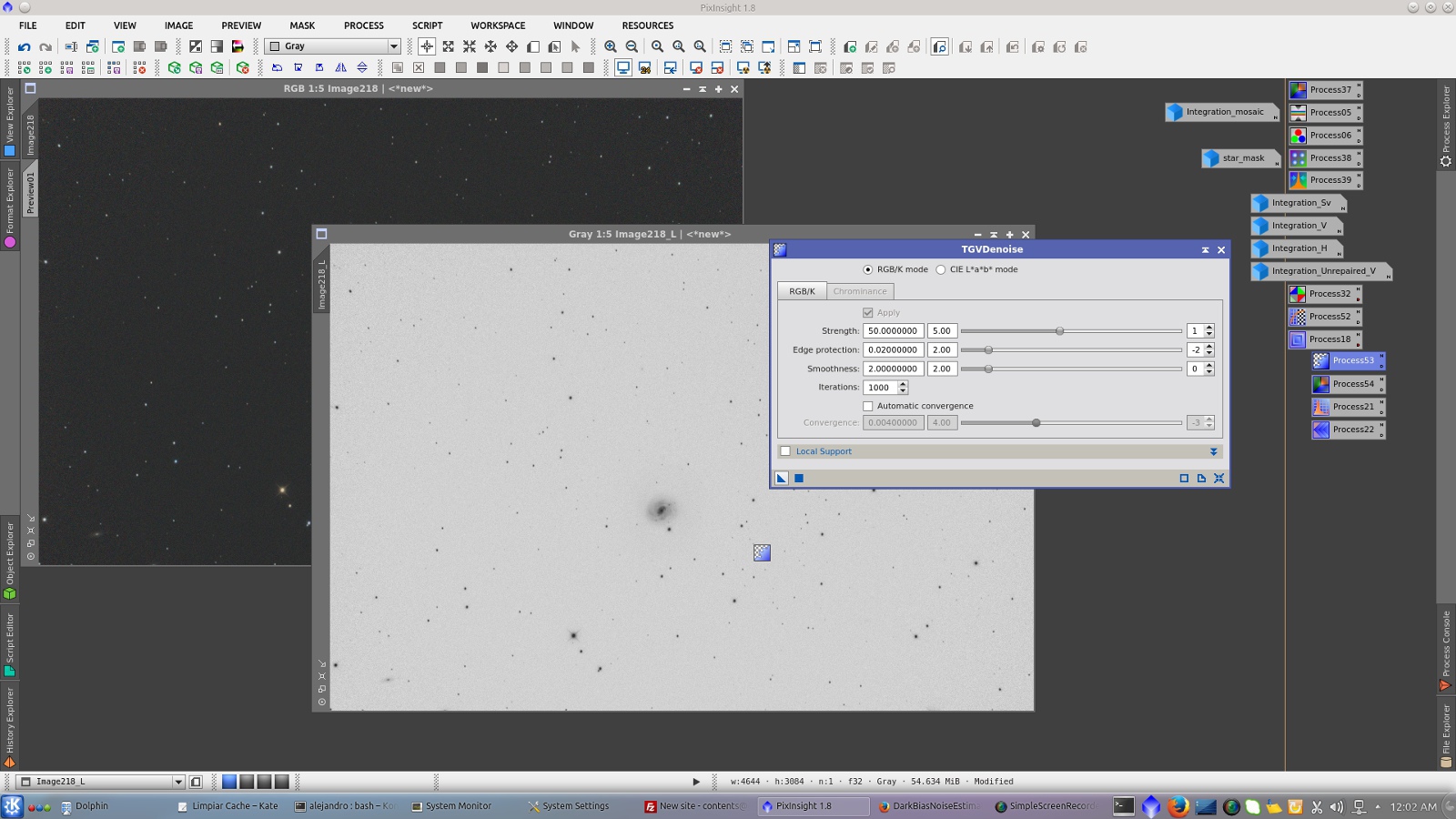 Using RangeSelection tool again as support can be seen that there is still a gradient. Then apply DynamicBackgroundExtraction to correct it in the mask. 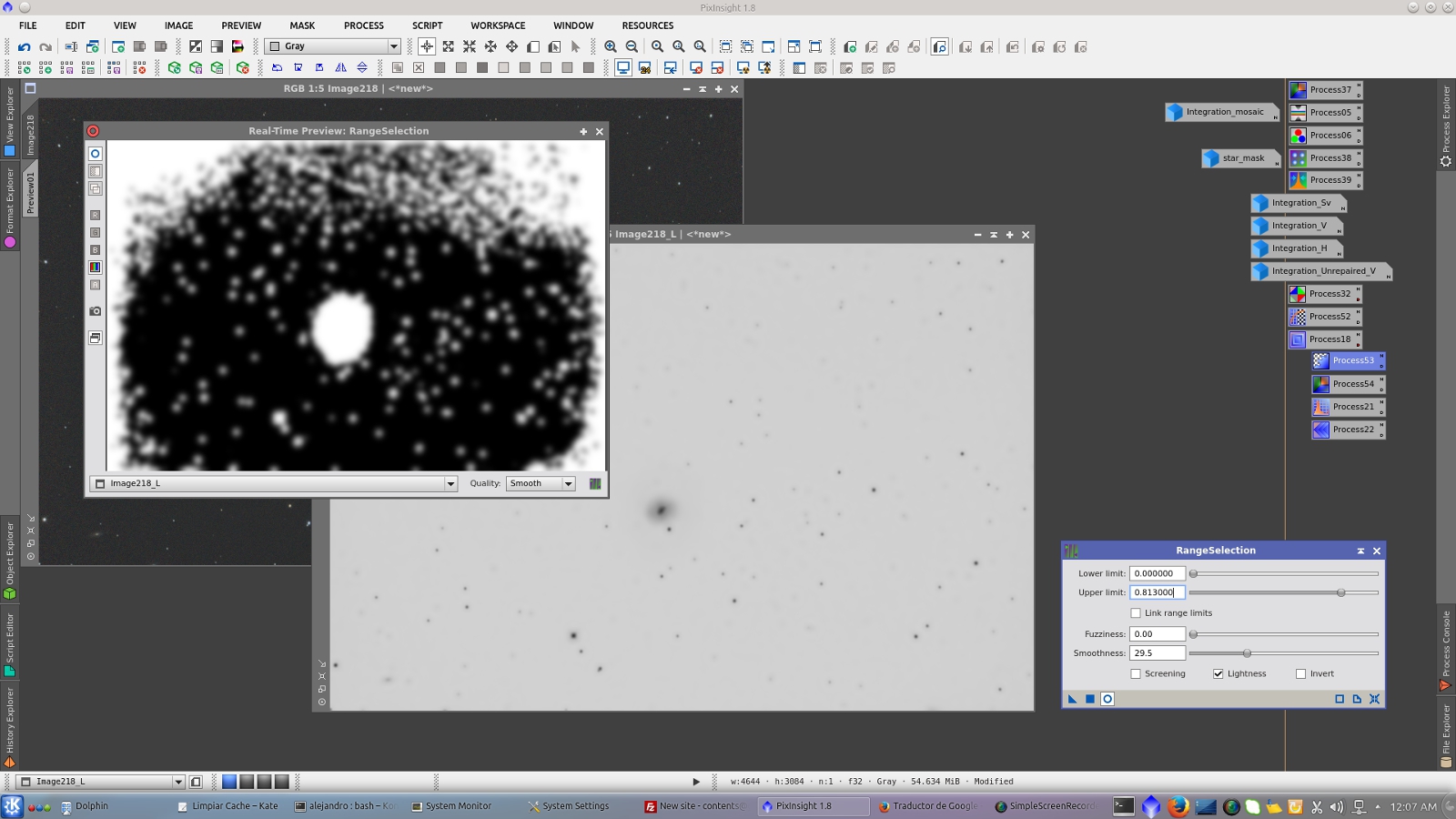 After correction with DBE, check again with RangeSelection tool with the same values to see how the gradient was remove on the mask 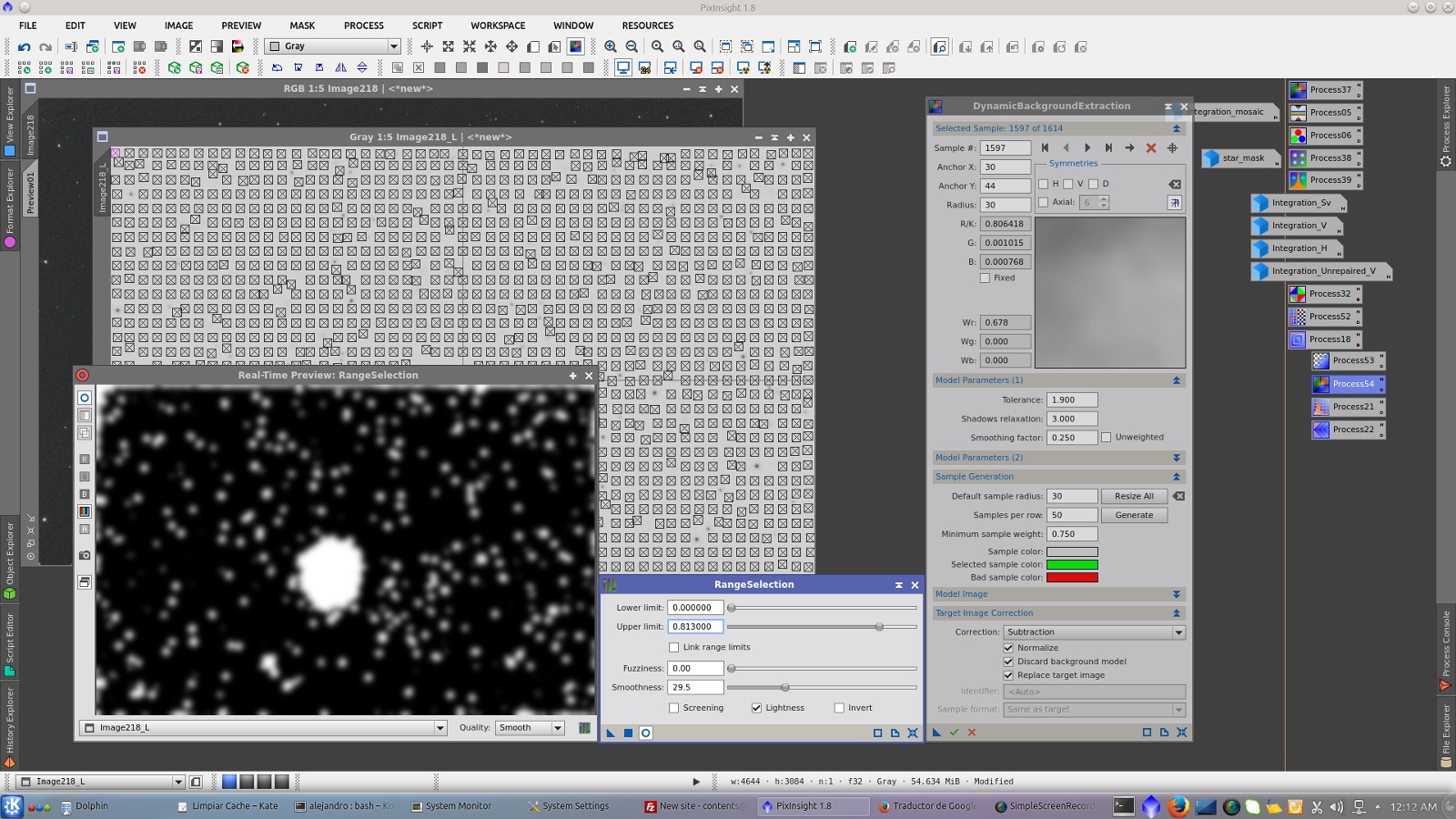 Saturation of the image and slight increase of the lightness using CurvesTransformation Tool. And also using the Lmask to protect the background 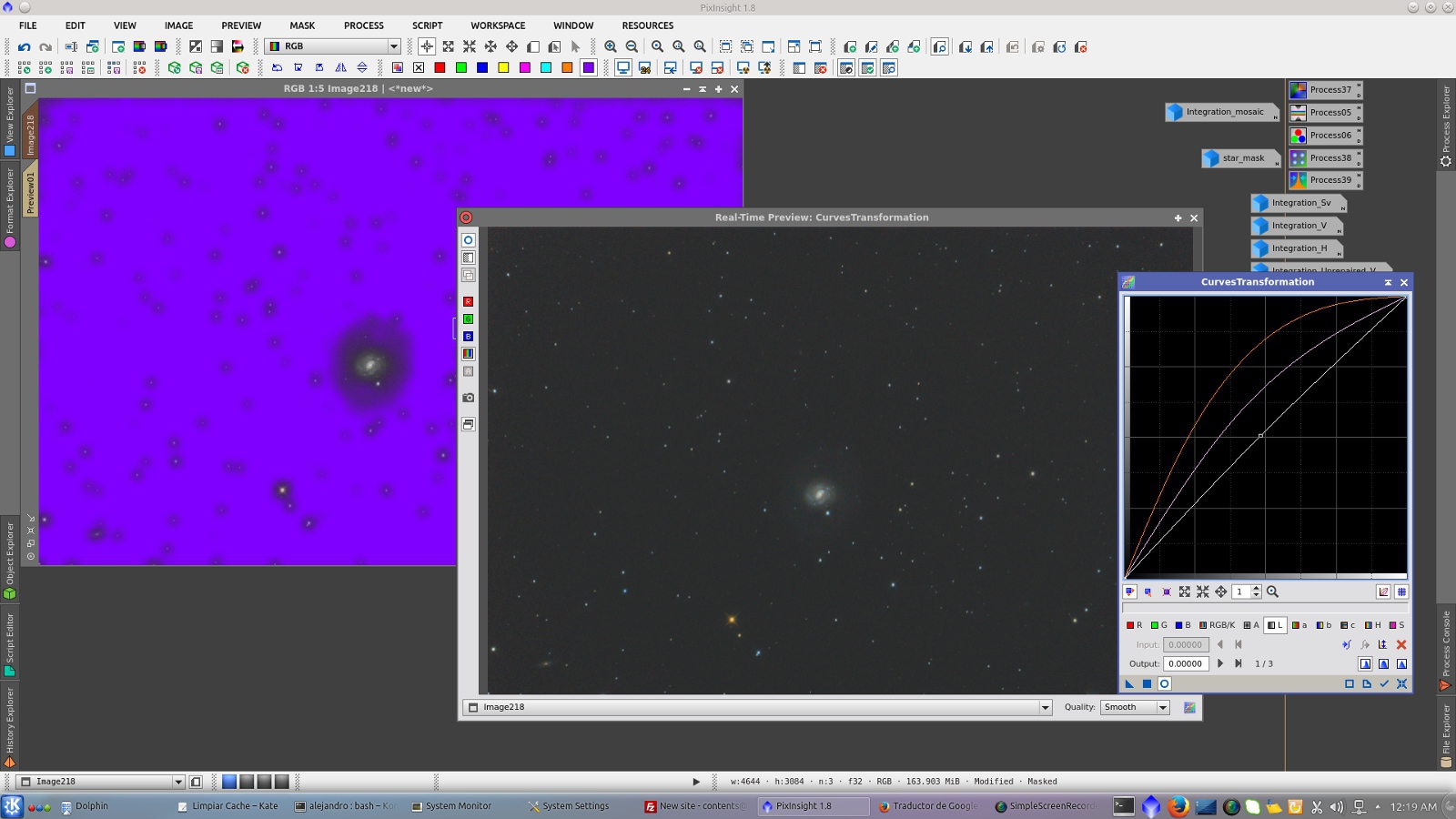 Saturation gives better colour but also increase the noise in chrominance. To correct it use ACDNR only in Chrominance setting the Prefilter in Multiscale and using the built-in Lightness Mask to protect brightest areas of the image at the same time than protecting the background with Lmask 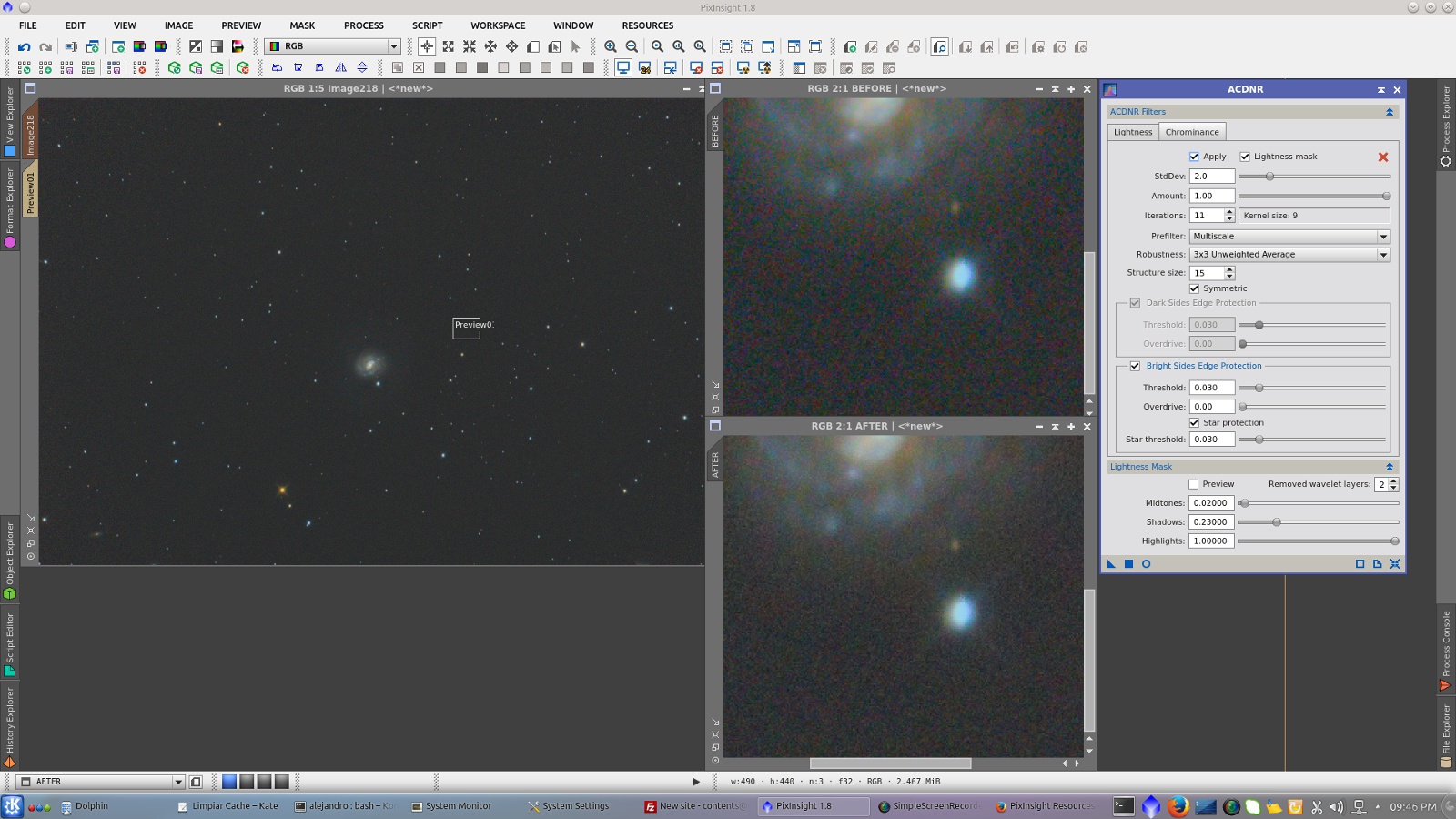 Increase contrast with Gamma Stretch. First generate other Lmask and use it without modification to protect the galaxy while decreasing the background 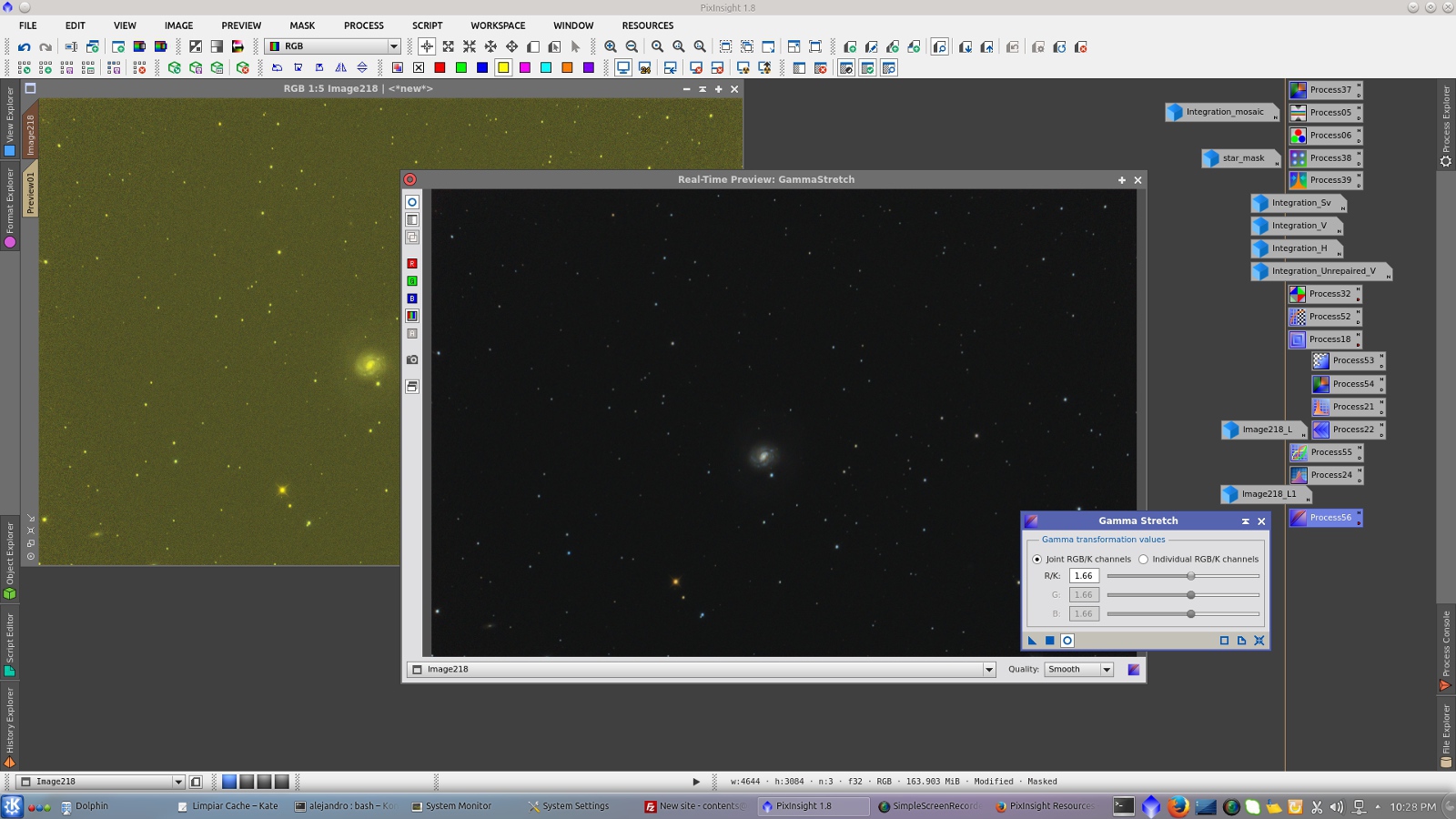 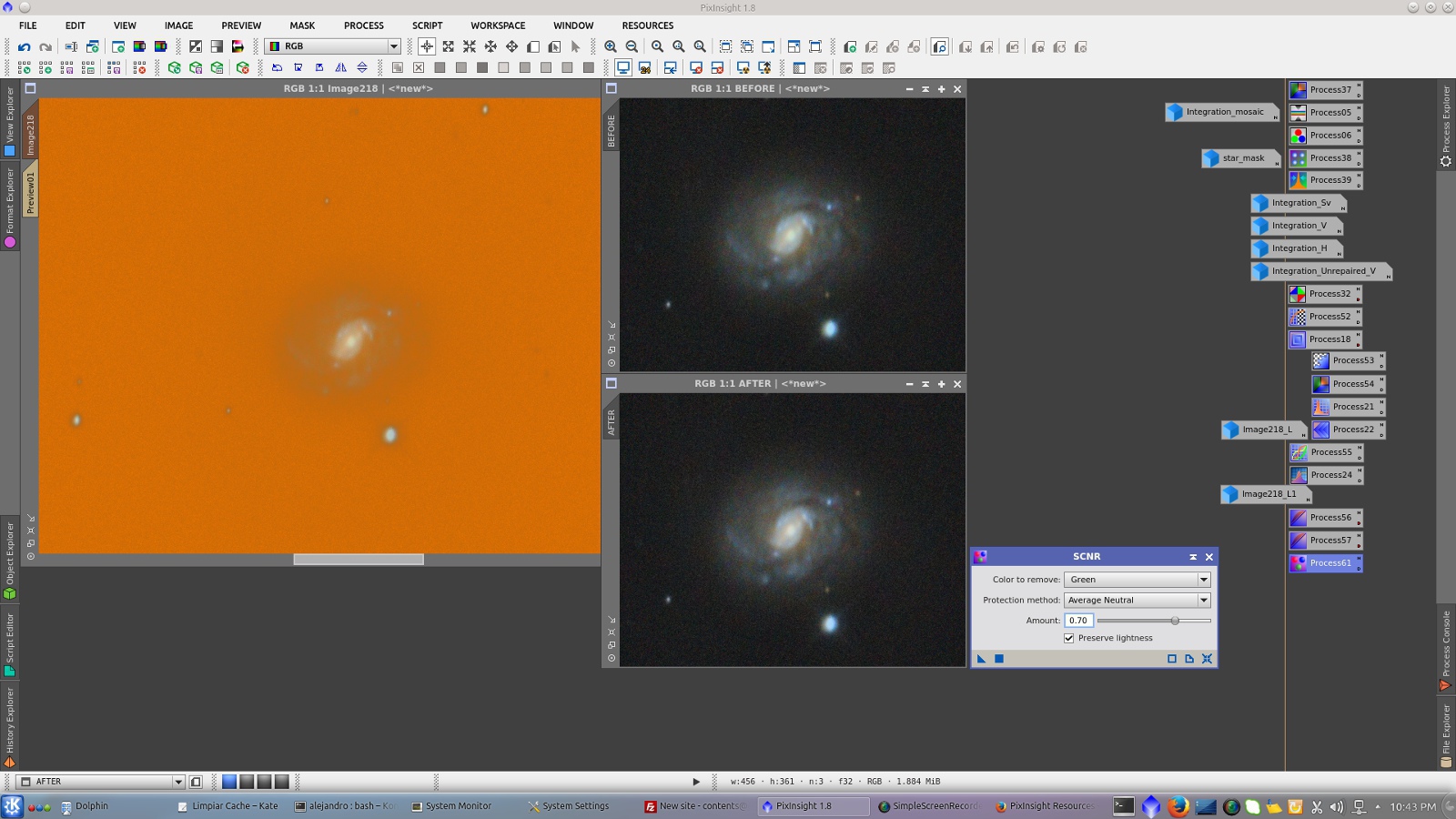 To center de galaxy in the image use DynamicCrop tool to crop and resize for web publication. I choose 1920x1210. See this article for complete information for using this tool. 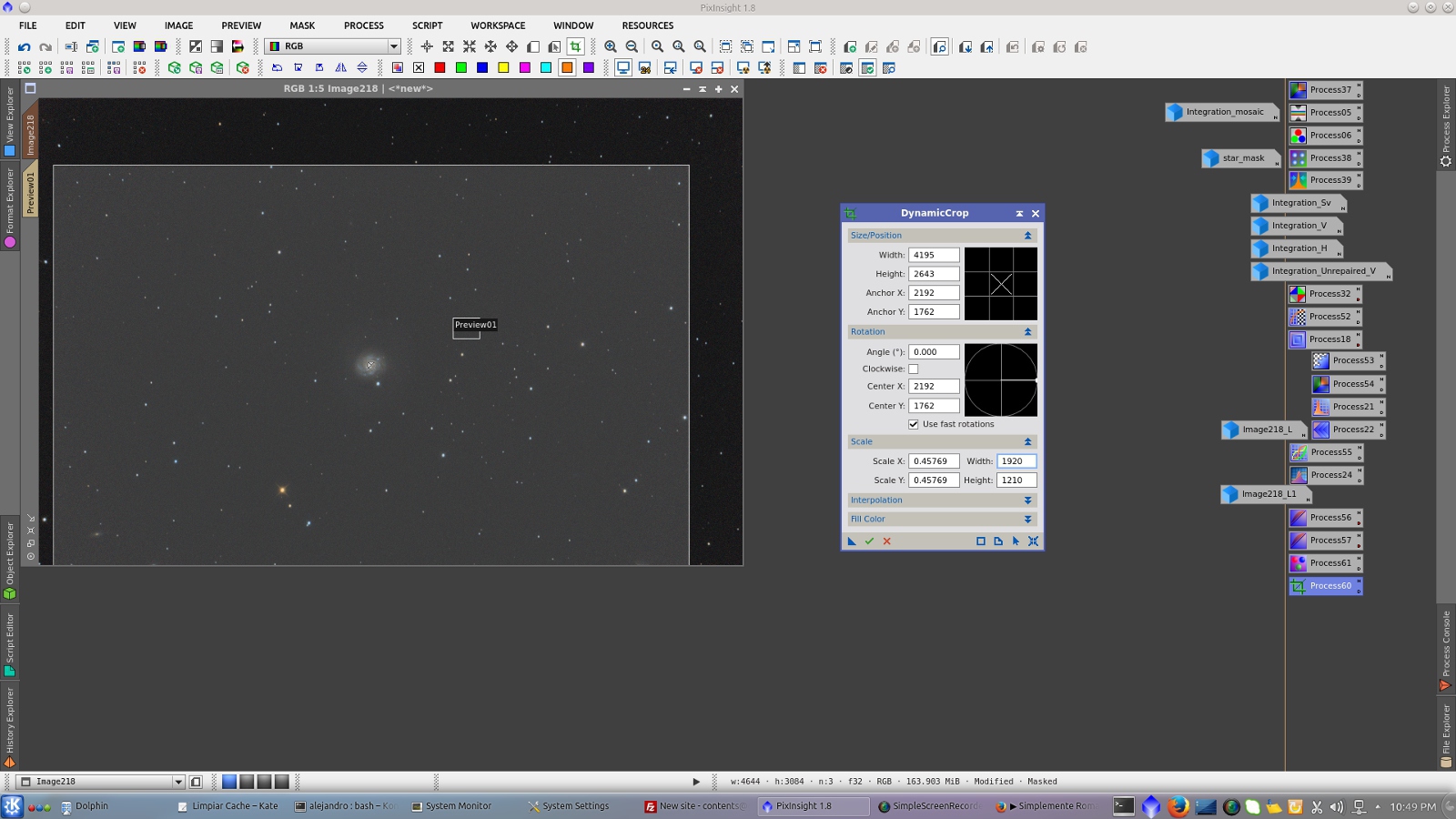